This is an ultimate guide of Allium, aromatics and peppers used in Chinese cooking with pictures. After writing so many recipes, I found that there are lots of ingredients unfamiliar to the blog readers. I hope this can help you to know more detailed information about Chinese ingredients. Also see 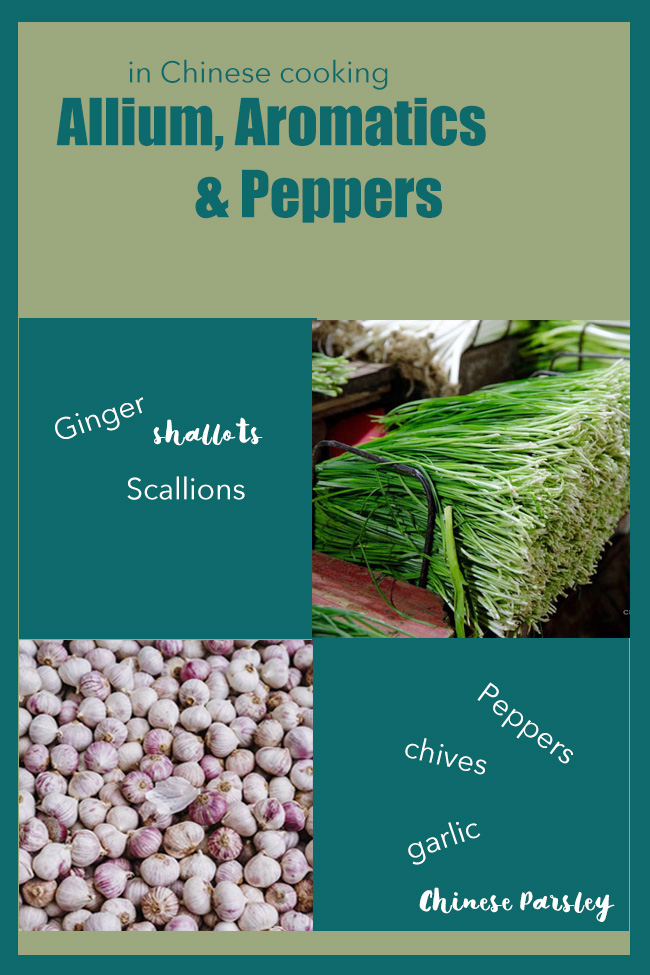 Onions including red onion, yellow onion and sweet onion are all available in China. But relatively red onion has a high popularity comparing with the other two types due to the strongest taste. Chinese people loves red onion more than the other two types.  Generally in Chinese cooking, we use onion mainly as side ingredients instead of aromatics. 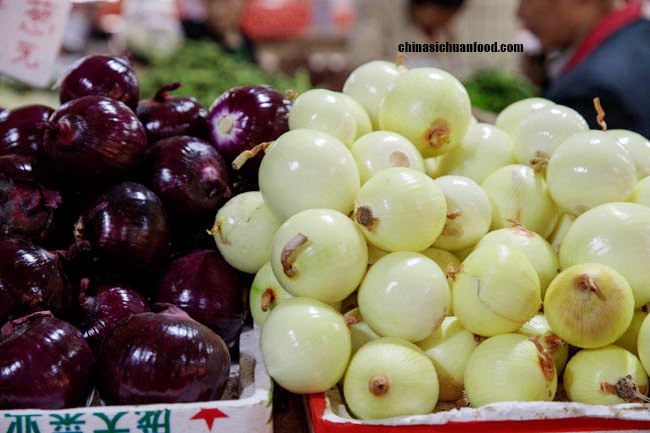 In China, scallion is often called as "Spring onion" or "small onion" in comparing with large onions (大葱). The Chinese variety is usually thinner than the version you get in stores outside China. We have two varieties, one is with white head while the other one has a light red head.

Scallion or spring onion is usually used as an aromatic in Chinese cuisine. We usually add several sections of the white part with garlic and ginger to get a very basic flavor for savory dishes. Additionally, we chop scallions and mix it with other ingredients for example flour or egg. Scallion and flour create the delicious scallion pancake (thinner version, shanghai scallion pancake or simplified scallion pancake from batter). Chinese scallion is a special variety that never do form bulbs.

Large scallion or sometimes referred as "large scallion" is quite large comparing with scallion mentioned above. Different from other onion family, leek don't form useful bulbs.

Large scallion has a large white head with shorter green parts.The white part (white leaves) has the strongest flavor.  It is extremely important to northern cuisines. People in Shangdong province eat leek scallion white section directly wrapped by a thin Jianbing. It is also the most important side ingredient of a peking roasted duck meal and the famous Mongolian beef. The green leaves are also edible but with a less oniony and more cabbage like flavor. 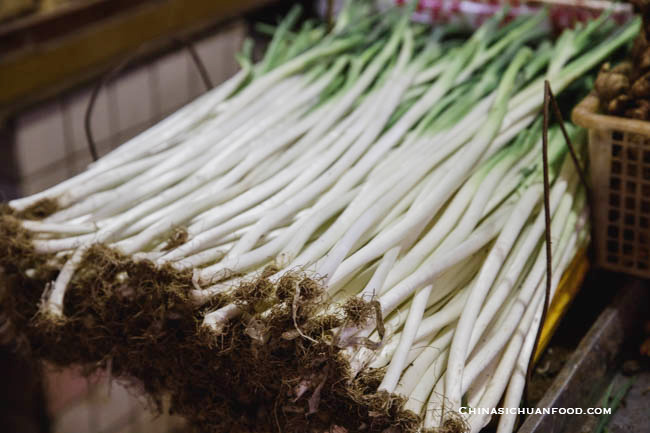 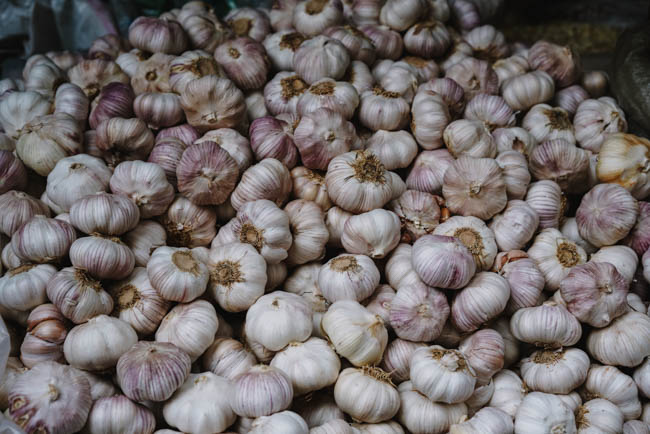 In addition to the common garlic, there is a special variety in China - single bulb garlic. Since it only has one bulb or clove, we call it single clove garlic (独蒜). This single garlic has the strongest flavor in this group and been widely used in southwest China. 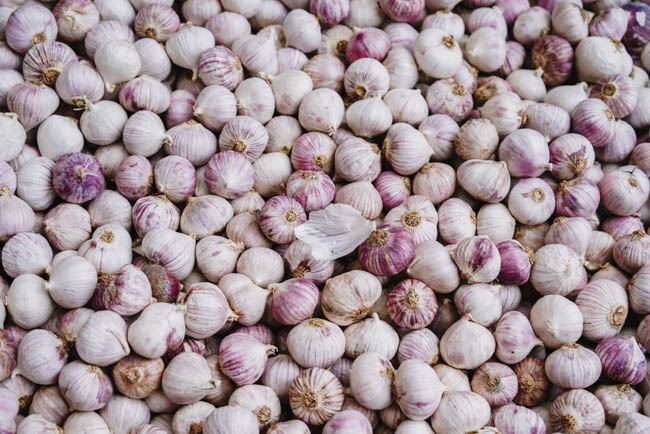 In most of Chinese cuisine especially Sichuan province and Hubei province, garlic sprout works similar as large scallions. But it has a strong flavor and consequently used as an important aromatic.  We add garlic sprouts in stir fries like twice cooked pork belly and mapo tofu. In Hunbei and Hunan province, people love to use garlic sprouts in hot pot and stews. 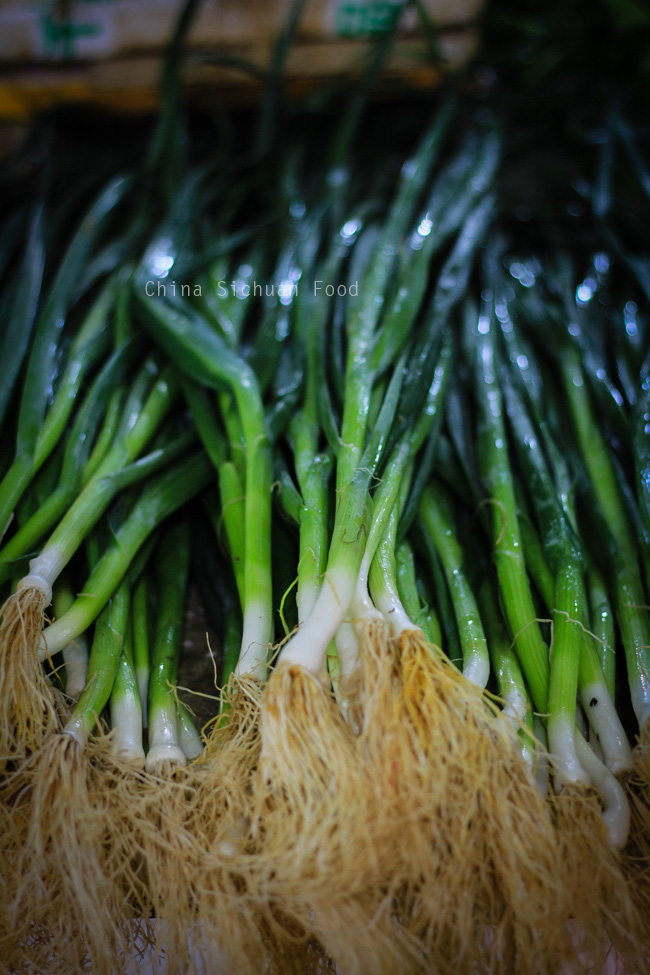 chives are read as Jiu Cai (韭菜) in Chinese.  There are both lovers and haters to Chinese chives. It is widely used in Chinese kitchen as a dumpling filling aroma ingredients. I believe you have tried Chinese chive dumplings and potstickers. Additionally, we roast the tender leaves or make a simply stir fry dish like this chive and egg stir fry.

Blanched  Chinese Chives, 韭黄 or “jiǔ huáng” are chives grown without sunlight. The lack of green pigment produce a very unique yellow color. It is widely used in all Chinese cuisine especially in Cantonese cuisines in famous beef chow fun. It gives the basic flavor of regular chive but sweeter, milder and even tender. But yellow chives are much expensive than regular chives. 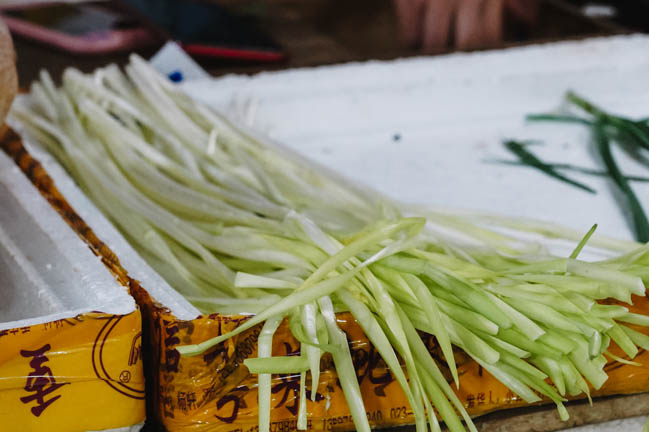 Shallots are a distinctive variety of onion with smaller bulbs. After cutting, it has almost the same texture with onion but it has finer texture and a milder and sweeter flavor.  Shallot is the key ingredient for lots of famous Taiwanese dishes like Lu Rou Fan, usual producing a very unique flavor after fried with oil. 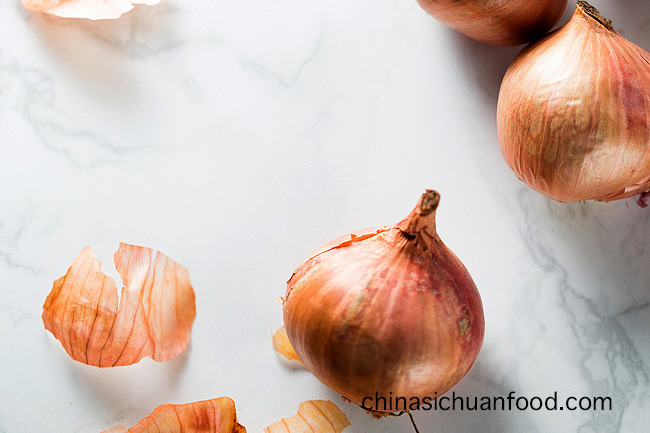 Ginger or ginger root is considered as one of the most important aromatic used in Chinese kitchen with garlic and scallion. There are also two types of ginger commonly used in Chinese cooking. The first type is common large ginger and the other kind is small ginger, usually with lots of sands on surface. The later one has stronger taste and is quite popular in Southern cuisine.

In addition to old ginger root, we harvest very tender fresh young gingers too. Those fresh baby ginger is mainly used for pickles or stir fries. 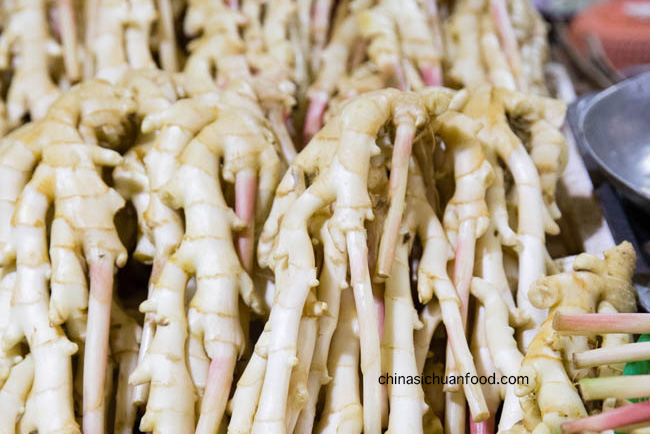 Chinese parsley (very similar to another type coriander and also interchangeable ) is usually used as an herb, popular in soups, salad and dips. There are two varieties in China. Sometimes the stems are added in stir fry dishes. They are generally sold in Asian market along with other herbs such as green onion.  The most favorite way of using Chinese parsley is to top the chopped one on noodles.

Chinese toon (toona sinensis) is harvested from the young leaves of the Chinese Mohagany tree in Spring time. It is available only in several weeks when the tree is just sprouting and the leaves are extremely younger and tender.  Chinese Toon are usually used as a herb and fry with eggs. 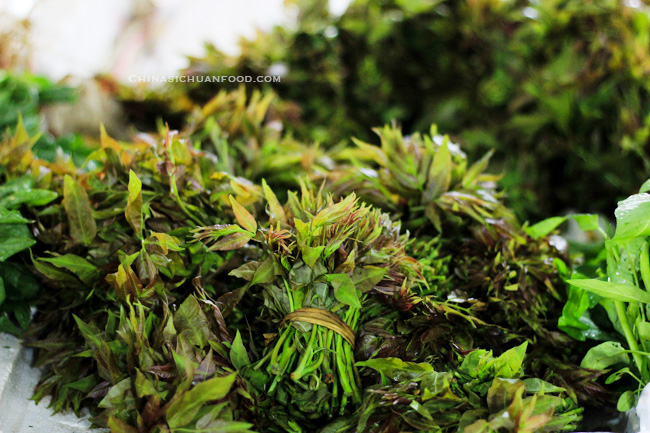 In addition to bell peppers, Chinese people love chili peppers more. The most regular green peppers are middle in hot level and called as “青椒” (in most cases are shishito peppers)  in Chinese. In order to distinguish, bell peppers are called "甜椒". Green chili peppers can be used as a spice in stir fries or sautéed directly. Sometimes we cut them into small dices and fry with scrambled eggs. 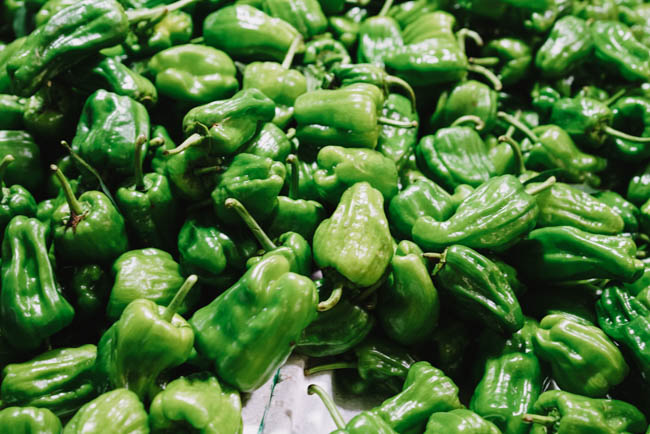 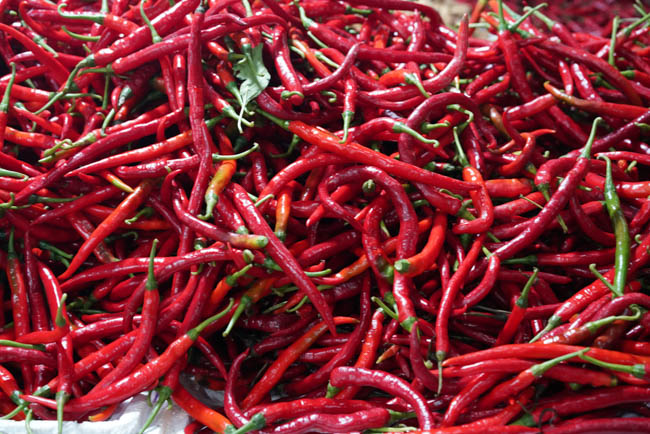 Those small chili peppers are the hottest among those common used types. In China, we have facing the haven (朝天椒) or Thai peppers (泰国小辣椒). They are usually used in salad. In order to make them becomes milder, people in China love to use the method of fermenting either in a spicy paste or pickled peppers.

Wild peppers are usually green in color, sometimes colorful. It has the highest hot level and thus not used directly in cooking. In most cases, they are fermented for a while to milder the hotness.

At last, Elaine hopes that this post can be helpful for choosing your aromatics for Chinese cooking. If you want to know some more, please send me a comment. 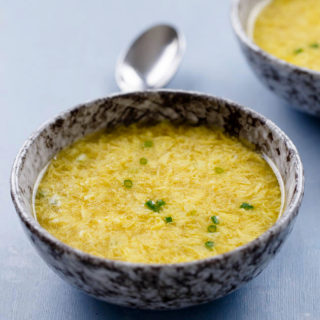 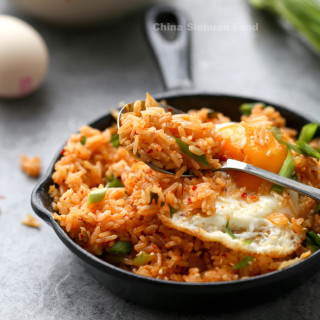