Yummy chicken chow mein with the best treatment of the tender thicken meat and the best combination of vegetables and mushrooms.

I get lots of complains saying that my Chinese food bloggers do not cook chow mein and lo mein. At the first, I am quite shocked. Chow mein is extremely popular outside China, but generally it is part of Cantonese food with the most famous soy sauce fried noodles (豉油皇炒面).  We really are quite freestyle for noodles, either lo Mein, chow mein or soup noodles. I love to introduce more about these types of noodles inside China.

The most common and popular noodle dish in China is soup noodles (汤面). There are actually hundreds of soup noodles. Fresh and plain, hot and savory, hot and sour. The tastes differ a lot in different areas of China. But in generally, it is the top dishes in China.

The second position should be lo mein (捞面). But we usually call this type of noodles as dry mixing noodles (拌面), which has more liquid than chow mein but no soup base included.  Lo mein is a Cantonese based dish while dry mixing noodles exist across the country.

Chow mein (炒面)is quite humble and free style in Chinese kitchen. You can use most of the leftover vegetables and noodles to make a bowl of chow mein.

Even I was quite shocked at the very beginning and was thinking that making Chow mein is quite easy, using your own favorite vegetables and sauce. However, with the second thought and searching, I found wow this is not that simple. So I decided to develop some yummy chow mein and lo mein recipes in this month.

The most common side ingredient for chow mein is chives (either plain green ones or blanched ones), onion (white onion > red onion) and bean sprouts. But are they universally the best for all types of meat. My answer is no. Beef, pork (fresh or roasted), seafood and chicken, they have different characters themselves and thus should be matched with matched vegetables and sauces. 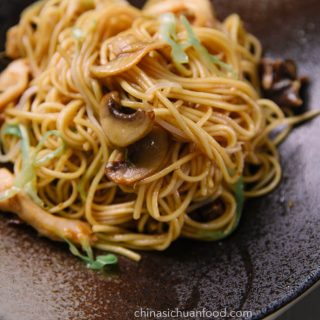