Red bean paste is one of my favorite dessert fillings and it is widely used in Asian cuisine and Chinese desserts. Making red bean paste at home is quite easy and requires several ingredients only.

Red bean paste, also known as Anko in Japanese, is a popular ingredient used in many traditional Asian dishes. It is made from red beans (aka red beans)) that have been boiled, mashed, and sweetened with sugar and smoothed by fat. The texture of red bean paste can range from thick and smooth to slightly chunky. It has been widely used in Chinese and Japanese cuisines. Although store-bought red bean paste is super convenient, the homemade version is so amazing that I want to share with you the process.

Adzuki beans or Aka red beans are small red beans that are widely used in East Asian cuisines. It is quite larger than mung beans we call it "赤红豆". It has a slightly sweet and nutty flavor, with a texture similar to lentils when cooked. Adzuki beans are highly valued for their medicinal properties in Chinese traditional medicine as they are believed to help reduce inflammation, nourish the kidneys, and promote healthy digestion. So there is a famous Chinese red bean soup. Adzuki beans can be easy to found in Asian stores. In addition to the raw beans, there might be cooked red beans such as sweetened red beans (蜜红豆).

Chinese red bean paste is slightly different from the Japanese version which only requires beans and sweeteners. We also add fat, either pork lard or butter. Adding oil to the red bean paste has several advantages including

If you want a vegan version, you can use natural vegetable oil as a substitute or use coconut oil. In addition to this difference, we also have different varieties in texture.

Chunky texture (Tsubu-an) is the most convenient and easiest way of making red bean paste. The paste is thick with red beans as large chunks inside the paste. You can use this version to make red bean soup directly.

Smooth version (Koshi-an) - this one is much popular in Chinese. Traditionally, boiled red beans are stored in a bag and then wash in water to let the puree come out and remove the skins. But a quicker version is to blend in a blender until really smooth.

How to use red bean paste

In Japan, red bean paste is used in traditional desserts such as Dorayaki (a type of pancake), Yokan (a jelly-like sweet), and red bean ice cream. Following are some recipes to try at home with your homemade version of red bean paste.

Wash the red beans and soak the dried red beans for at least 8 hours or overnight. Longer soaking time can shorten the cooking time.

Drain and transfer the beans to an instant pot, and add water. Press beans and cook the red beans until really soft.

Transfer the beans along with the water to a blender. Blend until really smooth.

Get a non-stick pan, transfer the mixture, and add butter, sugar, and a very small pinch of salt. Continue stirring the fry the mixture until it can wrap up together.

Skip the blending process and add the beans directly to the non-stick pan. Add sugar, a very small pinch of salt, and butter (if using).

Continue stirring the fry the mixture until it can wrap up together. 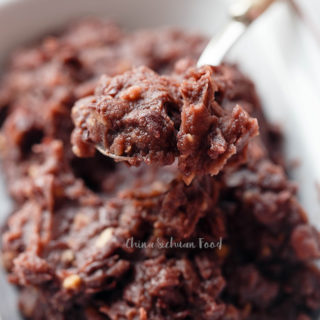 Store the paste in air-tighter container up for 2 weeks. Prepare time do not include the time for soaking the beans.