Hot and sour soup (Suan La Tang) is a common dish popular in China especially in cold winter. It is firstly invented for poor people who need to warm their body up. So lots of white pepper used. It has different versions in China. In Sichuan area, hot and sour soup is called as Suan La Tang which is mainly cooked with chicken and pork stock while in Northern areas, it is called as Hu La Tang and usually with beef or lamb stock. Although there are some differences in texture including the color and flavors, they share lots of similarities too.

Dried shiitake mushroom is much better than fresh mushrooms because of its flavor. The sun drying process makes the ribonucleic acid much easier to release and hydrate. But it has stronger flavors compared with fresh shiitake mushroom and is less smooth in texture. So the principles

Tofu performs to create a melt in mouth and super soft texture. So soft tofu will be the first choice for this soup.

You can use pork shreds, chicken shreds, cooked beef or lamb, seafood as protein. In addition, ham, spam and other already processed protein is also great for hot and sour soup. If you get high quality ham, your soup will be quite amazing. If all of the processed protein is not by hand or not accepted, I suggest using coated pork shreds. In Sichuan cuisine, we have a very popular local snack named as “水滑肉” literally mean sliding meat in water. It has a very lovely texture, super tender inside and smooth for the shell. I will introduce the authentic version later. But you can have some basic idea about how the meat can be after making this hot and sour soup. 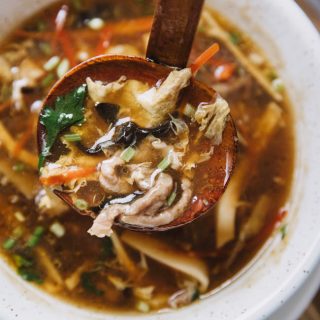