Basic braised bamboo shoots with soy sauce and sugar. Spring is here and fresh bamboo shoot will come out soon.

Bamboo shoot is a magic ingredient which can be used in soups, stir-fries, stews, hot pot, salad and pickles. You can't image how popular it is in China. We harvest quite a large amount of fresh bamboo shoot both in winter and spring time. My grandma loves to add some to her pickling jar. I love to cook a pot of healthy chicken soup. My husband loves salad and frying with pork belly. Almost everyone loves bamboo shoots in my family.

Fresh bamboo shoot usually has a bitter taste. Some are quite faint while others might be quite strong. Basically we do not suggest using bamboo shoot directly after harvest. Firstly we blanch the bamboo shoot in boiling water for a while (based on how large the bamboo shoot are) and then soak in clean water for hours. Change water twice or three times. Then you can taste it and see whether the bitter taste is removed. The packaged bamboo shoot sold on the market is pre-cooked and can be used directly. You can encounter bamboo shoot with faint bitter taste and do not require such a long soaking time.

This recipe was created in the spring of the last year when my father bring me a large bag of fresh bamboo shoots. Then I forgot this one and time flies very quickly. When I got all of the writing, editing done, summer is coming and there is no fresh bamboo shoot available. So I delay for one year. 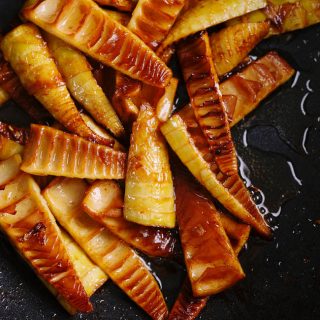